For most part of the country, Americans spend the Fourth of July weekend with family in their backyards cooking up tasty BBQ items. In a certain part of Los Angeles, thousands of people stockpile the Convention Center on Figueroa Street to celebrate the nation’s largest Anime Convention, Anime Expo. Hitting a record breaking 100,000+ Unique and 305,000 Turnstile attendance, 2016 marked its first year to reach such phenomenal numbers.

Bringing guests from all over the world, Anime Expo, which is organized by the non-profit Society for the Promotion of Japanese Animation, attracted fans all over the country. Filling up the West and South Hall of the Los Angeles Convention Center, attendees were treated to a heap of entertainment and cosplays along with the intense Japanese Culture inspired vendors, artists, and exhibitors. In order to accommodate this event’s growth, the Kentia Hall parking garage was converted to the Artist Alley. There was a lot to experience during this extravagant weekend and attendees were able to immerse themselves throughout four days.

One of the prominent changes made this year were to stop non-badge holders from entering the South Hall lobby area. In past Anime Expo’s, the lobby area was open to all and only the exhibit floor required badges. With the recent shootings in Orlando and Dallas just weeks prior to AX, it was necessary to enforce it. On a side note, many attendees were standing in zig-zag lines outside of the convention center to pick up their badges on Day 1. Some complained about wasting over two hours in line which could have been used to spend time inside the exhibit floor. Many attendees are open to the idea of having badges sent to their homes prior to the event to save themselves from standing hours in line in the hot July Los Angeles weather 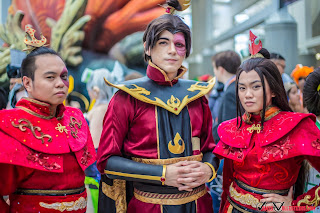 The enormous growth since the prior year, the staff of AX were equipped with knowledge and were able to maintain a safe environment for all. Staff kindly asked people to not block major common areas that were used to get from one place to another and sustained a level of professionalism in the process. A trait that is rarely seen at other conventions I have attended before.

Anime Expo is directed towards the promotion of Japanese inspired popular culture but all walks of life gathered to showcase their art in the form of cosplay, art and creativity. Cosplayers came out with top tier costumes for all to see and appreciate. Many of the craftsmanship to these costumes clocked in hours and hours of work. The love and inspiration of a certain character really brings out the creativity from someone as seen with their costumes. Attendees, photographers (pro or novice), snapped away with their phones or cameras to take home a piece of memory with them. Children enjoyed the cosplay scenery as most of the characters worn by cosplayers are not commonly seen in theme parks. It is a breath of fresh air to see an animated character come to life.

This year saw the world’s first Anisong World Matsuri event that featured an assortment of live music and experiential performances. Electronic pop icon DJ TeddyLoid provided music during AX’s fashion show alongside unforgettable performances from J-Pop band Dempagumi.inc. From premiers such as Makoto Shinkai’s “your name”, exclusive clips of season two of FLCL, and industry top dogs like Shoji Kawamori, Kenji Horikawa, and Nami Sano, Anime Expo provided a place for these creative people to gather and for fans to get a unique once-in-a-lifetime experience.